It came the day after I’d submitted my book proposal: an email from my editor requesting the full manuscript and a bit of “tough love.”

I’m going to be a bit rude and tell you that your title is terrible. In the age of digital searches, readers need to be able to understand what the book is about based on the title alone.

I now know it wasn’t just me.

Many of the authors I work with have told me their editors told them their title needed work.

Few offer actionable solutions for how to title your academic book.

When some of my boot camp alums asked for advice about humanities and social science book titles, I realized that I had little to tell them beyond what I’d been told (make it search friendly).

My inability to give them tangible advice dissatisfied me. So, I did what any good researcher does: I conducted a study.

After assembling a corpus of 188 humanities (literary criticism) and social science monographs recently published with US/UK university presses, many of which are now accessible in open access format via the Open Research Library, I began my analysis.

While I wish I had done this quantitative research before finalizing my own title–since these four lessons would have improved my title significantly!–I nevertheless offer it to you now so that you don’t have to struggle the way I did.

Prefer to Work through This Material In a Self-Guided Course Format (with a Downloadable Workbook)?

Almost all monographs I surveyed had both a main title and a subtitle (separated by a colon). In fact, fewer than ten percent of humanities and social science book titles in my corpus lacked a subtitle. 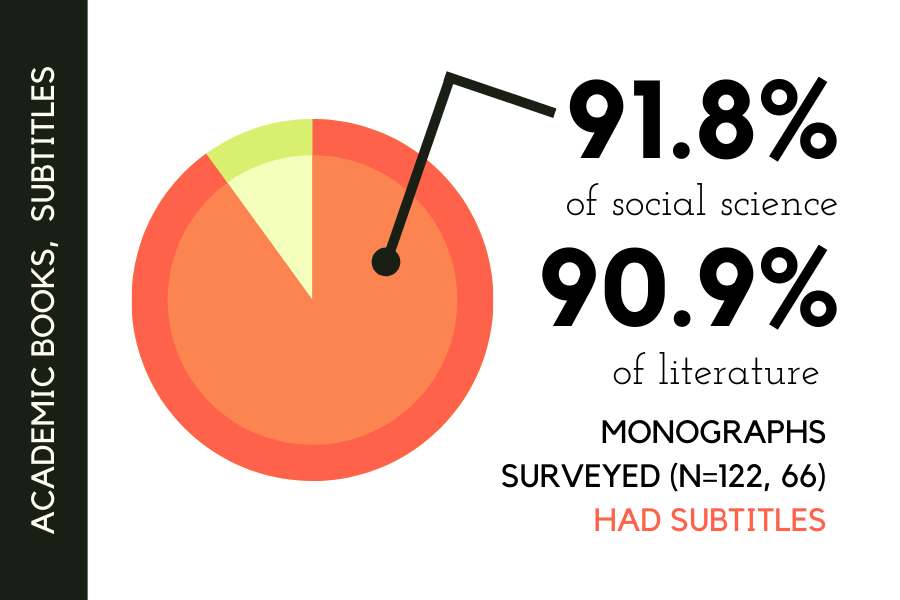 The data also told a consistent story when it came to the length of full titles (all the words in both the  main title and subtitle): between 9 and 12 words is a very safe bet. While literary criticism book titles tended to be about one word longer (11 words) than social science book titles (10 words), almost half of social science and humanities book  titles fell in this range (9 to 12 words).

From a material standpoint, too, this makes sense: book covers only have so much space. Academic book covers must be legible and not overly cluttered.

Lesson 3: About Half of Academic Book Titles Evoked Place or Time, Usually toward The End of The Subtitle

In addition to analyzing the structural features of academic book titles, I also broke down their common traits and elements.

Should Your Academic Book Title Reference Place and/or Time?

How Should You Reference Place and/or Time in Your Academic Book Title?

Place and Time as Nouns or Adjectives in Academic Book Titles

Most titles of academic books referenced places and times in their subtitle through nouns or adjectives that qualified the book’s topic or each other. These nouns and adjectives were often one word, but sometimes a phrase (e.g. “in the long nineteenth century”; “since the belle époque”). Because your title length is limited (9–12 words), I would highly recommend trying to convey time and place as efficiently as possible. “At the end of the fifteenth century,” for instance, takes up 78% of a 9-word title and 58% of a 12-word title–before you even begin to include searchable key terms!

Ranges of years (as numbers with a dash like “1945–1991”) were always the final piece in an academic book’s title. My corpus had no exceptions to this rule.

Some humanities and social science book titles were able to situate their book in place and time merely through references to their topic. For instance, because its titular personalities are twentieth- and twenty-first-century French and American artists, the title The Reclining Nude: Agnès Varda, Catherine Breillat and Nan Goldin implies a comparative focus on those times and places.

Notice, however, how using the artists’ names instead of a time and place (“in twentieth-century France and the US”) implies the limits of the book’s claims. While the book is set in twentieth-century France and the US, it is not making claims about French or American photography and film broadly speaking. Rather, its claims are limited to these filmmakers/ photographers, specifically.

Sometimes, authors expressed their times and places more creatively. However, I recommend trying to indicate your book’s place and time as straightforwardly as possible.

The phrase “from the microwave to Bruno Mars” might help you indicate that you’re going to be looking at American popular culture (or maybe domestic life?) in the mid-twentieth and early-twenty-first centuries, but ask yourself whether you could be more direct (“in the US since WWII”). Notice that your reader will find it difficult to immediately “get” the meaning of this phrase.

Participants in a mini-workshop I ran on academic book titles found one thing simultaneously most surprising and most reassuring: there are broad patterns for academic monograph titles.

Though not all titles of academic monographs follow these broad patterns, many do. So, use them as inspiration when deciding how to title your academic book.

Here is a master formula that covers the titles of many academic books. (Note: once you see this schema, you will never be able to look at most academic book titles the same way again!)

With such a short format, only a handful of templates produce the majority of academic book main titles:

Note: you might be coining a book-level concept, but not all book-level concepts/key ideas work well as the main titles of academic books. If you are coining a 2–4 word phrase whose meaning is immediately accessible to your reader, you can certainly have it serve as your book title. Do not, however, invent such a phrase purely for your book’s title. Here are examples of phrases that illustrate the difference between “immediately accessible” (and therefore can be book-level phrases) and those that are not.

Similarly, two common patterns emerge regarding academic books’ subtitles. These are certainly far from the only academic book subtitle arrangements you will find, but they constitute good starting points for planning your book’s own subtitle.

The first main formula consists of two to three main concepts given in the form of a list, followed by the preposition “in” and a phrase about the corpus, time and/or place.

Note how the list and “in” + corpus/place/time phrase translate well to search queries of target readers:

While the titles it generates are certainly not flashy, they are clear and search-friendly.

The second broad title format consisted of two main concepts, one of which was a nominalization (“the ___ of ___”). Because these subtitles tended to be longer, they did not include the “in” + corpus/place/time phrase as frequently as the tripartite subtitle did. Note, for instance, how the third subtitle alone already contains 10 words, which is close to the maximum for humanities and social science book titles.

Notice how most of these titles, too, would likely appear as search results to target readers’ queries:

Readers need to be able to know precisely what your book is about based on the title alone.

Additionally, you should think about what phrases or keywords scholars (or your book audience) will be searching for, and consider prioritizing those terms in your title.

See the examples following the tripartite formula and the nominalized formula above to understand how titles might correspond to queries (and vice versa).

Your Academic Book Title Must Be Taken at Face Value

A final cautionary note. We academics (especially humanities types) tend to do a lot of “problematizing.” And for good reason. A lot of things do need to be problematized (perhaps including my own use of the verb “problematize”).

Your 80–100,000 word academic book is absolutely the space for this type of work. Problematize away!

Your 9–12 word title, however, is definitely not the place.

Assume that your reader will take every word in your title at face value. If your book takes issue with and critiques at length a concept that some people believe (but you don’t) do not give that concept space in your book title.

The conclusions I draw above are based on the corpus of 188 academic monograph titles I selected for this small study. So, they offer you a good starting point to ensure that your academic book title fits the broadest of norms.

However, these are far from the only possible formats for academic monograph titles.

So, I recommend you use the guidelines above to help you generate solid preliminary title ideas for your academic book (at least ones that will not immediately evoke horror in your editor!) and then tweak them as necessary for your project.